Not sure where to start. So much of what’s happened these past few days is so hard to describe …

If you’re ever looking for the tiny frontier town of Skagway, it’s nestled up the end of a beautiful fjord and surrounded by rugged wilderness and looming peaks. And that’s where, on Thursday, the Zaandam dropped anchor (well, docked, actually).

This ‘Gateway to the Yukon’ was once the busiest place in Alaska. How come? Well, Skagway, in the late 1800s, was the hectic kick-off point for the famous Klondike Gold Rush. Gold-panners streamed up every valley and sloshed through every creek in search of the promised yellow ore. And it’s hard to imagine the frightful conditions those hopeful (desperate) prospectors endured during winter, when this region freezes almost solid.

We, for our part, spent the morning doing it in style – grabbing a taste of what life was like back then by riding the antique White Pass & Yukon narrow-gauge railway up-up-up into the mountains, past silvery-purple rock faces, death-defying canyons, and once-famous locations like Deadhorse Gulch. On the way back down, we even tried our hand at gold-panning (no kidding) – and almost everyone came away with a few shiny, lucky, glowing specks in tiny plastic bags! 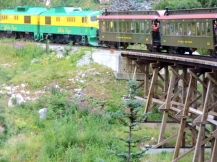 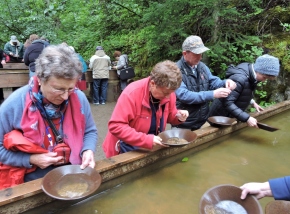 We then got to ride a helicopter (in fact, a fleet of helicopters) ever so much higher onto Alaska’s spectacular icefield – where we were treated to eye-popping views of jagged peaks, plunging valleys, glacial rivers, before landing on the mighty Meade Glacier for a guided walking tour.

The weather wasn’t as kind as it might’ve been, but the heli-ride (a first for lots in our group) was thrilling. However, what really overwhelmed us was the scale of this landscape. Sorry, folks, but this one highlight you’ll never appreciate secondhand – you’ve gotta see it for yourself. I mean, against this huge black-and-gray-and-white ‘river-of-ice’, our helicopters looked like insects. And we humans felt like SPECKS! 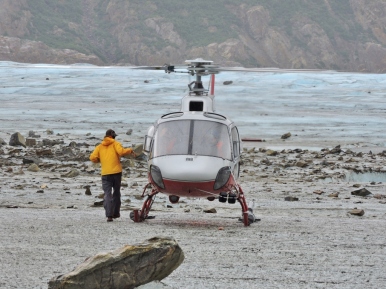 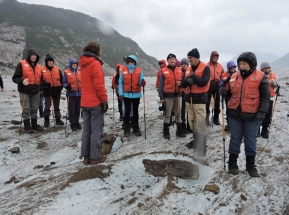 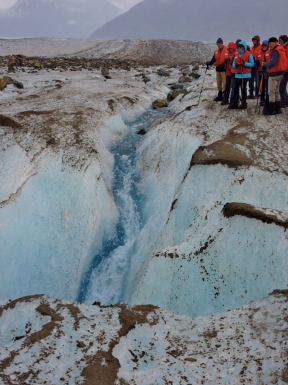 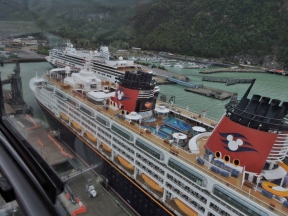 But wait – there’s even more!

Having briefly witnessed the TOP end of Alaska’s glaciers (there are more than 200,000 of ‘em up in those mountains) we spent Friday getting up-close-and-personal with the BOTTOM end of a few biggies … as our ship (arriving in the foggy drawn) cruised ever-so-slowly through the UNESCO World Heritage Reserve known famously as Glacier Bay National Park. This 100km-long fjord, filled with inlets, looming peaks, frozen cliffs and floating icebergs, has more tidewater glaciers than any other place in the world.

Look, why don’t you do what we did? Put on your long undies and warm layers and woolly hats while I give you a few Staggering Glacial Facts:

Anyway, some of us spent hours on deck and on our balconies trying to capture this explosive moment on our cameras – not caring that we got cold and hungry. We waited, and hoped, and held our breath, and even prayed for a calving-to-beat-all-calvings. But the best we saw was a few smaller ice-crunches that went off like a gunshot and hit the water in a cloud of spray.

Not that it mattered. Because this was yet another mind-blowing, gob-stopping Alaskan experience that we will always remember. 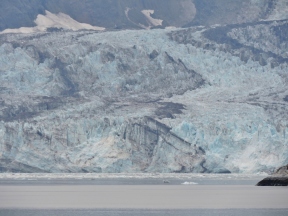 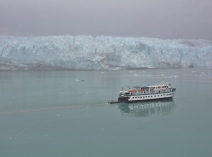 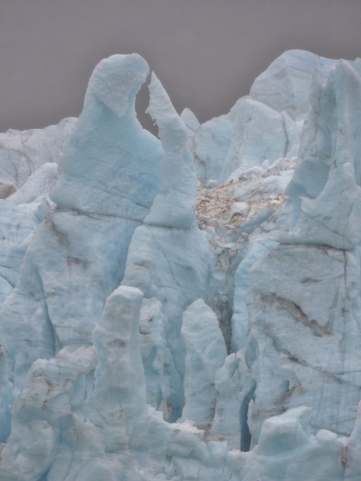 STILL TO COME: We say goodbye to the Zaandam, and head ashore in Seward – gateway to the Kenai Fjords National Park and home to more awesome mountains, glaciers, and creatures great and small …

PEOPLE-NEWS: Four more world-famous quacky yellow ducks have been given out …

P.S. If you want to receive future Mad Midlife Travel Blogs in your INBOX, just sign-up (top-right) for your free Email Subscription! And if you’d like to leave a message for someone in our group, just click on the little speech bubble at the top of this entry, and add your comments! (Make sure you say who it’s for and who it’s from – and keep it brief.)